Dark Chocolate is a Health Food! 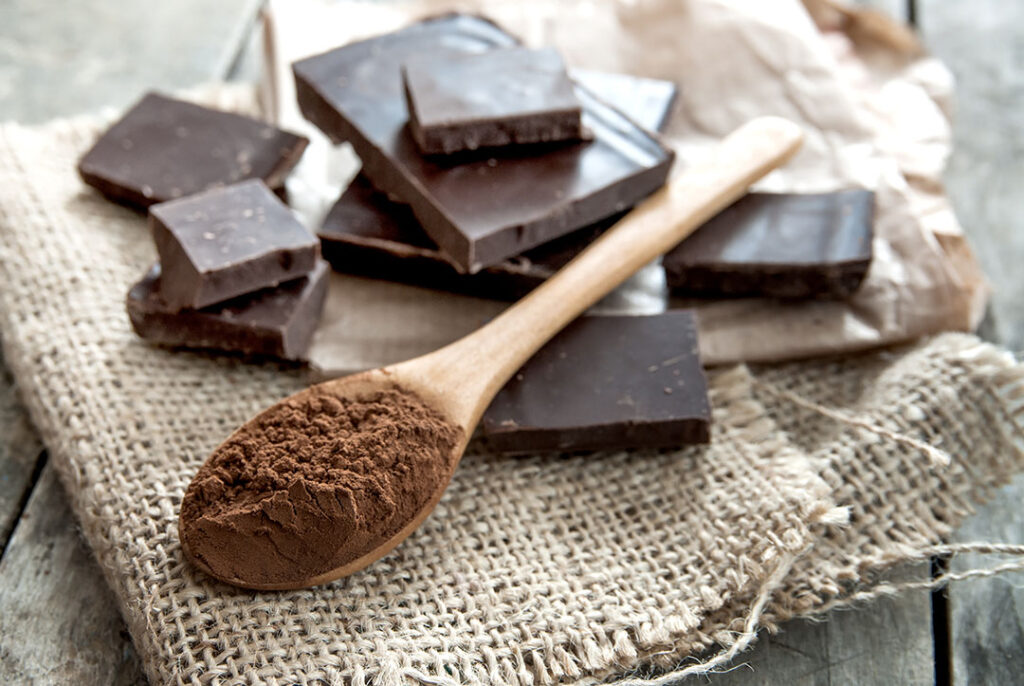 Chocolate lovers, take heart! Research has given us plenty of reasons to keep on eating dark chocolate without feeling guilty. In fact, several studies shows that chocolate is quite effective against the number one killer of Americans, heart disease.  And the news gets even better for females! Let’s just say, you may want to cave on this particular craving (in moderation, of course!)

Good News for Chocolate (and your heart)

Epidemiologic studies have supported the notion that regular consumption of foods containing flavonoids reduces the risk of cardiovascular disease. While flavonoids are found in many plants, cocoa is particularly rich in a subclass of flavonoids known as flavanols. Several dietary intervention trials with flavanol-containing cocoa products have shown improvements in endothelial and platelet function, as well as blood pressure.

In a meta-analysis conducted at Brigham and Women’s Hospital in Boston, researchers reviewed extensive data from randomized control trials to determine the effects of flavanol-rich cocoa products or dark chocolate on lipid profiles.  In all, 10 clinical trials consisting of 320 participants were included in the analysis. The researchers determined that intervention with dark chocolate cocoa products significantly reduced serum low-density lipoprotein (LDL) and total cholesterol levels. No statistically significant effects were observed for high-density lipoprotein (HDL), the “good” cholesterol.

Although the Boston researchers found no effect from chocolate on HDL, a research team in the UK has recently found that chocolate, which is high in polyphenols, is effective in improving the atherosclerotic cholesterol profile in patients with diabetes by increasing HDL and improving the HDL/LDL ratio.

A study reported in the International Journal of Immunopathology and Pharmacology suggested that diesel exhaust particles which generate free radicals may be involved in the recent increases in the prevalence of lung diseases. The study investigated the effects of dietary supplementation of antioxidant polyphenols from cocoa on mice in which lung injury from diesel exhaust particles was induced. Supplementing of their diets by 1.0 percent polyphenols inhibited the diesel induced lung injury.

Other evidence of lung injury indicating oxidative stress was also observed in the lungs of diesel-treated mice, however, these indicators of free radical damage were barely visible in mice pretreated with the cocoa supplement.

Chocolate is a great antidote to stress in females

Prolonged stress leads to behavioral and metabolic changes, and alterations in eating behaviors. In a study reported in the journal Appetite, researchers wanted to see the effects of chocolate consumption on chronic stress in animals. They found that male rats under chronic stress ate more chocolate than females, but continued to exhibit the physiological effects of their stress, such as weight gain, abdominal fat deposition, and higher plasma levels of total cholesterol, LDL-cholesterol and glucose.   Clearly eating chocolate was not an effective behavior for them to use to cope with stress.

On the other hand, the female rats who ate chocolate in response to stress maintained a stable physiological profile and did not show the ill effects seen in the male rats.  The fact that females often reach for chocolate in times of high stress while males generally do not may be instinctual behavior.

Love of chocolate goes back at least as far as the Aztecs. In fact, during the rule of Emperor Montezuma people valued cocoa beans so much that they were used as currency. They believed chocolate could help them boost physical and mental energy, provide memory and wisdom, and act as an aphrodisiac.

#1: Dark chocolate is full of nutrients.

It is an excellent source of potassium, magnesium, and calcium. It also contains vitamins A, B1, B2, D, and E.  Additional, a 100-gram bar of dark chocolate with 70–85% cocoa contains:

The theobromine in chocolate stimulates the central nervous system and facilitates muscle exertion. The small amount of caffeine it contains increases intellectual activity, watchfulness, and resistance to fatigue. An average size chocolate bar contains just about 6 mg. of caffeine, compared to 100-150 mg. in a cup of coffee.

#3: Dark chocolate may help your cough.

A study conducted in the U.K. found that theobromine from chocolate may be more effective as a cough medicine than standard drug treatments. The research showed that theobromine acts on the sensory nerve endings of the vagus nerve, which runs through the airways from the lungs to the brain.

#4: Dark chocolate can help your mood.

The mood-boosting effects of chocolate are due to endorphins. Your body releases these natural brain chemicals when you eat chocolate. Endorphins can help with premenstrual syndrome. Anandamide in chocolate acts on brain receptors to help promote a mood boost and enhance feelings of well being.

#5: Dark chocolate may help your heart.

A researcher from the John Hopkins University School of Medicine says that eating a few squares of dark chocolate every day can reduce your risk of dying from a heart attack by as much as 50%. His study found that blood platelets clot slower in people who eat chocolate.

Another study found that adults with chronic fatigue syndrome who eat 1.5 ounces of 85% dark chocolate were less fatigued.

An Italian study found that eating dark chocolate normalizes the body’s metabolism of blood sugar, reducing the risk of diabetes and hypoglycemia.

Chocolate is also high in tryptophan. This is an essential amino acid that increases the body’s production of serotonin, antidepressants and stress relievers. Keeping up your tryptophan level may prevent cravings for starchy and sweet foods. And, if you are trying to lose weight, it can help you with that, too!

It’s okay to indulge in one of your favorite sweet treats! Just make sure you keep the quantity you eat of it in check. If you need more help improving your nutrition and filling in any gaps you have, talk to your local AlignLife Chiropractor who can guide you in finding the best nutrition for your body and health goals.

Nearly half of adults in the United States have hypertension or high blood pressure (BP). High blood pressure is a condition that can slowly damage your body over time. It can cause disabilities, kidney failure, and stroke, and is often a precursor to heart...