Lower Your Blood Pressure with Yoga 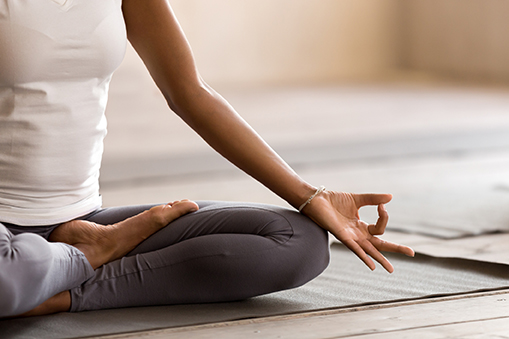 The American Yoga Association states that the quickest way to lower stress is to improve one’s breathing and posture, both of which can be accomplished with yoga poses and deep breathing. Reducing stress can help to lower blood pressure. Yoga is specifically known to decrease blood pressure, especially the diastolic score, which is most critical for health. According to Yoga Journal, some of the best poses for high blood pressure include fire log pose, bridge pose, reclining hero pose, and corpse pose. People may perform these exercises in a sequence or separately depending on how much time they have and personal preference.

Fire log pose is a simple seated position that stretches the hips and groin muscles. To do fire log pose, sit on the edge of a folded yoga mat, bend the knees, and cross one leg over the other, resting the top foot on the opposite thigh. The legs resemble two logs of wood stacked diagonally one on top of the other.

The hands may rest on the floor to help with balance. It is important to sit tall and pull the shoulders back in this pose. Sitting up straight strengthens the muscles in the core, namely the muscles of the abdomen and back. This improves one’s posture, which lessens the pressure on the lungs and heart. Improved posture makes breathing easier.

Typically, one would hold the pose for 60 seconds and then switch the position of the legs.

Bridge pose is a minor backbend performed in a reclining position. This exercise provides a range of benefits, including lowering stress, fighting fatigue, lessening headaches, and improving conditions such as high blood pressure and sinusitis.

To do bridge pose, lie face up with the knees bent. Position the feet so that the lower legs are perpendicular to the floor. With the arms relaxed at the sides, lift the buttocks and lower back toward the ceiling. Some people prefer to place a yoga block between the knees during this pose. Holding the position for 30 to 60 seconds is ideal.

Reclining hero pose is a restorative yoga pose done while lying on the floor. It provides an exceptional stretch to the thighs and knees, as well as the ankles and abdomen. This pose not only benefits high blood pressure but can also improve digestion and lessen menstrual pain.

To get into reclining hero pose, sit with the knees bent and legs apart so that the buttocks rest on the floor between the calves. Slowly lean backward until the back and neck rest on the floor. The arms can relax palms up at the sides. Holding the position for 30 to 60 seconds is sufficient.

Corpse pose is one of yoga’s best-known poses and is often used to end sequences. Corpse pose is basically lying on one’s back with the arms relaxed at the sides. It is customary to allow the legs and hips to roll slightly outwards while resting in corpse pose.

Lying in corpse pose is an excellent opportunity to practice deep breathing exercises. Breathing deeply into the diaphragm brings more oxygen into the blood and strengthens the muscles involved in respiration. Over time, breathing exercises can improve focus and improve serenity. It is easy to look at one’s abdomen to ensure that the diaphragm is moving while lying in corpse.

All of these poses promote a calm mind and relaxed body. The more people focus on the poses and their breathing, the more benefits they derive from any yoga practice. In situations where someone has high blood pressure, it is particularly important to do everything possible to manage stress and improve one’s mood. Practicing yoga along with adopting a healthy diet can do wonders for high blood pressure.

Exercises You Can Do at Your Desk
September 6, 2021

Does Exercising at Night Affect Your Sleep?
July 24, 2021

8 Exercises and Stretches for Immediate Low Back Pain Relief
May 23, 2021
Search Alignlife.com
Schedule Your Visit